While most writers are known for stretching grammar rules to the limit to serve their (my) own needs (you’ll see), there are a few lines across which copywriters should not tread, particularly when your stuff will be going through an editor. 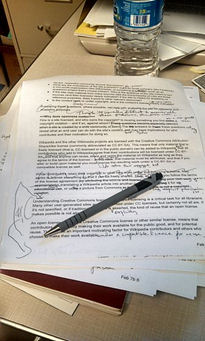 The AP Stylebook has been the guide of choice for the journalism industry since the early 1950s. While the MLA, Chicago and APA style guides hold no mysteries or challenges for anyone who attended college, worked in the business sector or writes in the academic or literary fields – none of these writing styles belong in news articles, copywriting, product descriptions, how-to articles or blogs.

Whether or not you see your sterling prose as being on a much loftier plane than AP styles dictate – buy or subscribe to the guide and learn it. It’s a very handy tool and it isn’t going anywhere soon.

The Oxford (or serial) comma is widely considered elitist and highly irritating by anyone in the publishing business outside of – um – Oxford or snooty literary and academic circles. Seeing it can induce rage in many writers and editors with the education, training and actual experience in journalism. Go figure.

I’m not saying the awful thing doesn’t have its place in the proper format (Yes. I am.), but taking the time to remove comma after useless comma has caused otherwise happy-go-lucky (or at least nominally sane) editors to bite dogs, finely hone sharp implements and search for writers’ home addresses.

Here’s a thought – unless you’re writing for a literary magazine or academic institution – or as a (God-forbid) period romance novelist – stop it. Champions of the serial comma scream as one, “… but it adds clarity to a sentence!” Let me put this as gently as I know how: If you cannot manage to write a concise, clearly understood sentence without the fucking thing, you’re in the wrong biz.

No one need apply

Auxiliary or modal verbs are just dandy to use when making a point in a tutorial piece, but one in particular has been beaten to the point of disgust. Do you really “need” to apply paint a certain way, follow up on a client review with a phone call or mix the batter for two whole minutes?
Nothing irritates like making simple directions a matter of life or death by using ‘need’ in a sentence. How about making a suggestion instead of a command?
Newbie DIYers starting their first projects are nervous enough without having to obey every step to the letter (unless you’re writing “Easy Brain Surgery at Home”) without risking certain disaster and possible injury or death. Back the hell off, already.

Many writers and bloggers enjoy tossing in a few em (long) dashes to indicate a pause – or just for drama. This – while considered a sin of laziness by some – does add impact (and majesty) when used judiciously. Please – take the time to figure out your keyboard shortcuts and learn how to get that thing on the page.
P.S. Pretty much every word processing program has this capability – so two en dashes no longer cut it.

It’s not all capital

Every blog or column has a title and every article has a headline. While the ultimate decision on whether or not to capitalize every word in either a title or headline usually depends on the house style or formatting preference, doing so to sub-heads is horrific to read and cuts the whole flow of a page into separate little snippets of irritation.

These sub-heads are only there for transition purposes and as clues as to what’s coming next. They Are Not Announcing The End of Days, so don’t treat them as such.

Sir Kingsley Amis, a celebrated English novelist and all-around drunken bon vivant (one of my personal heroes), once said, “If you can’t annoy somebody, there is little point in writing.” He was not referring to his editors.