Don’t think this is about the Flesch-Kincaid readability scale – it isn’t. There are times when that’s useful, but by now, most of us should have a pretty good grasp of determining who our audience is and how we should be writing to them.

This deals more with how to write for both the readers AND the search engines, without either of them suffering from our divided attention. We’re just moving the slider on that division… substantially.

Now that Google’s semantic ability has improved to the point that they can often determine what a document is really talking about, copywriters are largely liberated of the burden of having a separate thought process about writing “for search engines”. In other words, they can concentrate more on writing for the readers (which is really the way it should have been all along, right?)

Context should be the focus

That doesn’t mean that Google can always read the context accurately, of course – far from it. But over the last couple of years, their ability to do so has improved dramatically. And if the writer has a basic understanding of how Google works, it’s relatively easy to know when a particular document may be difficult for Google to understand, and modify the writing style accordingly.

So what can Google understand easily? 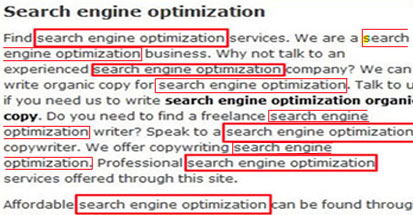 After a while, Google built a massive library of synonyms, so that terms like built, erected or constructed were recognized by their algorithms as referring to the same thing. So the abuse shifted a bit:

The ability to use synonyms and still get the point across helped copywriters a little, but of course, the owner of the bar in the joke above now wanted to rank #1 for all those terms.

Fortunately, Google has invested a lot of engineering hours into developing algorithms that can look beyond just headings and keywords to determine what a page’s main topic is… and while they’re not where they want to be yet, they’ve come a long way.

For instance, take the term jaguar… are we talking about the car, the football team, a big cat, the Java browser or the Mac operating system?

An algorithm that can look at a document in its entirety can often determine the context in which the term is used and rank it accordingly, under the correct topic. That’s some progress.

Now take into consideration the tremendous amount of information that Google has digested over the years and the context takes on new depth.

A discussion of 11 players should quickly let Google see that you’re talking about football or soccer.

Adding east coast and Florida narrows it down to either Miami or Jacksonville.

Toss Gus Bradley into the mix, and the Jacksonville Jaguars NFL team is obviously the topic of discussion.

Google relies heavily upon its Knowledge Vault (previously referred to as the Knowledge Graph), which derives its initial knowledge of facts from Freebase, Wikipedia and the CIA World Factbook, among other sources. The facts contained there figure prominently in the functions of various algorithms.

But more importantly, for our purposes, many of the algorithms that Google has developed are actually “learning” algorithms. That is, they recognize mathematical patterns and use evolving iterations of them.

That’s still not artificial intelligence, but it’s a critical step in the right direction.

So if you write a piece about the Jacksonville Jaguars, and mention some other verifiable fact that is relevant, but not yet in Google’s database, the algorithm may catalog that fact, along with its relationship to the Jaguars. Algos may understand things in a somewhat different fashion from humans… but they learn in much the same way. Exposure – understanding – acceptance – storage – and finally… use.

What does this mean to you? Simple! It means you can write in a much more natural fashion… in a manner that is more easily understood by readers and is more engaging, without being nearly as concerned about keyword usage.

That doesn’t mean stop using keywords altogether… just that you need to consider how you use them. Obviously, they should be employed in such a way as to be relevant to the topic at hand, but for our purposes, it’s equally important to consider how they relate to the rest of the content.

In some ways, Google is like that not-so-bright cousin some of us have… some things go over its head. Sarcasm, humor, irony…. even some humans don’t catch on to those easily… a machine will have an even tougher time of it. Vague references, especially using modern street vernacular, may be misunderstood or ignored entirely, as well.

That doesn’t mean you should leave those out of all your writing… just understand that they may not contribute much, in the eyes of the search engine. In extreme cases, they could even hurt.

The context must be clear

The main topic of a page should be abundantly clear – don’t wander between loosely related topics. A diet blog page may very well touch on things like fitness, health and energy, but two paragraphs on the benefits of a good night’s sleep might confuse the algorithm about what the page is talking about.

Sure, there’s a connection, but if the connection is either tenuous or not obvious, you might be better off making just a passing mention of it.

Or…. perhaps adding it to a bulleted list or as a sub-heading of direct effects of an improper diet. In the right hierarchy, Google is much more likely to understand how adequate sleep deserved a mention on that page.

AND, you’re one step closer to possibly ranking for a search term like inadequate sleep causes, causes of insomnia or sleeplessness remedies.

What does this all mean?

As already stated, it means you can write more naturally, without spending quite as much effort worrying about how to let Google know what you’re writing about. It also means that as a site publishes more and more quality content on a particular topic, the site will be increasingly associated with that topic (think “authority“).

Obviously, many of your clients are still going to be going on and on about keywords and ranking. You can now explain to them how keywords are beginning to take more of a backseat to context. And for the same reasons, ranking for a particular term is becoming a much less important goal. Although perhaps more attainable, it’s now much more difficult to measure.

Remember: Because the SERPs can vary substantially for different users, due to geo-location, search history, social connections and more, term rankings are often no longer a viable metric.

For example, returning to the jaguar term, a rankings check will tell you where you sit amongst all of the 184 million pages returned for that search.

But how many of those searchers were looking for information on the car, the jungle predator, the browser or the operating system? You need to be concerned with only the portion of those results that relates to your context.

Context is suddenly a nebulous aspect of ranking (not that it was really all that visible before), so rankings are becoming increasingly meaningless as a metric.

The focus should always be on CONTEXT!